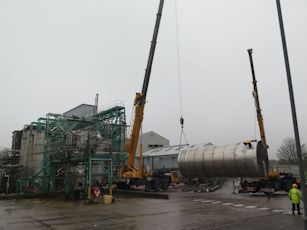 3DI Equipment recently completed the decommissioning and removal of a stainless steel storage tank farm at a chemical facility in the United Kingdom. The tank farm consisted of 14 off 87,000 Litre stainless steel storage tanks which were insulated and clad, fitted with side agitators and contained internal heating coils. The tanks were previously used to store fatty acids for use in the adhesives industry.

Once the tanks had been cleaned operatives began disconnecting pipework, instruments and valves in preparation for their removal by crane. Following the disconnections, the tanks were then lifted from situ into a loading area where they were tailed by another crane and then loaded onto incoming transport. The tanks were then transported to our storage facility and offloaded.

For further photos of the project please click here.

3Di Process Equipment is one of the world’s leading suppliers of used, unused and reconditioned process equipment and plants.

We are industry specialists in the purchasing and selling of used process equipment and plants around the globe.