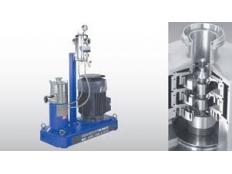 High shear mixers are used for mixing and dispersing solids into liquids, emulsifying immiscible liquids, breaking down solids and agglomerates and for other applications in which low speed agitation is often not suitable. They are often used in the cosmetic, food and beverage, pharmaceutical and other industries. Popular manufacturers of high shear mixers include Bran & Luebbe, Greaves, IKA, Netzsch, Silverson and Ytron.

A high shear batch mixer consists of a high speed motor and shaft to which a high shear work head is fitted. The work head comprises of an internal rotor that rotates within a stationary stator or screen.  High shear batch mixers are either top mounted to a vessel or alternatively are fitted to a mobile hydraulic floor stand and suspended over drums or vessels in which products are mixed.

Inline high shear mixers consist of a motor and housing with an inlet and outlet in which a high shear disintegrating work head is fitted. The work head is the same as that fitted to a batch mixer and like the high shear batch mixer head the work head can be interchanged with different rotors and work heads according to the product that is mixed. In line high shear mixers are often connected to pipework and can be used as part of a continuous process. Sometimes liquids and solids are mixed in connecting batch tank then recirculated through the inline mixer. Once the desired level of dispersion is reached the line is closed and the mixer is used as pump to transfer the product downstream.

There are also some variations of inline high shear mixers such as the bottom entry mixer which are fitted to the bottom or side of mixing vessels and mix the product in conjunction with a slow speed anchor stirrer or scraped wall agitator. Some manufactures have also designed skid mounted high shear mixers for blending powders and liquids. These are generally configured as semi-automatic systems with CIP which allows for continuous and batch production without the need for cleaning.

3Di Process Equipment is one of the world’s leading suppliers of used, unused and reconditioned process equipment and plants.

We are industry specialists in the purchasing and selling of used process equipment and plants around the globe.